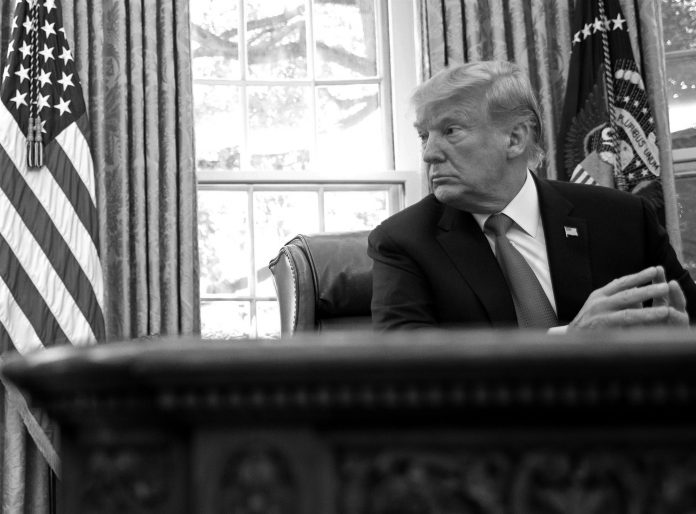 Republicans have toadied to Trump since the day he took office, and in doing so, have left themselves with no room to maneuver politically.

On Tuesday, the impeachment trial of President Donald John Trump will begin in the United States Senate. It ought to be a moment of pride in our constitutional order, a testament to the framers’ vision that no one, not even a president, is above the law. And as such, it also ought to be a moment of patriotic duty, when all members put the Constitution and the rule of law above party and personal interests.

An occasion dominated by something quite different… Fear.

“Fear of Trump drives the actions of the spineless GOP caucus, as does fear of the truth, and fear of a partisan base to which none dare speak the truth.”

Perhaps that should come as no surprise. For it was fear that brought us to this critical juncture in American history.

Fear was what Trump used to spin up the Republican base, using stereotypes, lies and hyperbole to dismantle decades of American political discourse.

Fear of facing off against former Vice President Joe Biden was what led Trump to demand, as a price for vital military and security aid, that Ukraine help him smear Biden.

Fear drives Republican members of the Senate today. Fear is what Senate Majority Leader Mitch McConnell is acting upon as he attempts to limit the length and scope of Trump’s trial. Fear of Trump drives the actions of the spineless GOP caucus, as does fear of the truth, and fear of a partisan base to which none dare speak the truth.

Fear prompted McConnell to float the idea of dismissing the charges against Trump. When that idea went over like a lead balloon, because even members of his own party realize how disingenuous it would appear, fear drove him the other way, toward allowing some semblance of a trial.

If a trial has to happen, McConnell said, there would be no witnesses called. Not even former national security adviser John Bolton, a longtime Washington hawk, who was unceremoniously dumped in September by the White House after he reportedly resisted the Ukraine scam.

Bolton’s lawyers say he has testimony that would add to the factual record – which is what a trial would permit, and so many Republicans fear. His testimony would serve to reinforce that Trump’s amorality is a feature, not a bug, of both his personality but also his presidency.

The crosscurrents of fear are complicated. Now, several endangered Republican senators, such as Maine’s Susan Collins, fearing the wrath of centrist voters, are banding together to attempt to allow witnesses during the trial. One can assume this change of heart wasn’t the result of patriotic soul-searching or a refresher course on their oaths of office. Rather, it is the fear of tough re-election battles back home that has forced these senators to show some “independence” from both McConnell and the president.

Still, fear of Trump himself and his minions, will keep members like Collins, Cory Gardner of Colorado, Thom Tillis of North Carolina, Martha McSally of Arizona and Joni Ernst of Iowa — all of whom face tough re-election contests in the fall — from doing anything more than playing their part as mute jurors during the trial.

Nothing but fear has led the Senate’s Republican majority to shamelessly attempt to circumscribe press coverage of the trial. God forbid that Senators approach reporters during the proceedings. To ensure that they don’t have to answer tough questions, McConnell is using the Capitol Police and the Senate sergeant-at-arms to stick the press in a holding pen.

Most troubling for the Republic, though, is that Republican senators’ fears actually boil down to a fear of the Constitution, and its prescriptions for addressing high crimes and misdemeanors committed by the president of the United States.

These men and women came to Washington, one hopes, to perform public service in support of that Constitution, and they should know in their hearts and their heads what has to happen. But their fear – fear that doing their constitutional duties will harm their personal political futures – has led them, and all of us, to this place.

When we look back, many Republican senators will wish they’d been driven not by fear of a bully, but by the courage of their convictions, and pride in carrying out their solemn duties. Many of them will have a long retirement to think about it. Because, hopefully, for many, these fears will bring about the very fate that so frightens them – and they’ll deserve it.