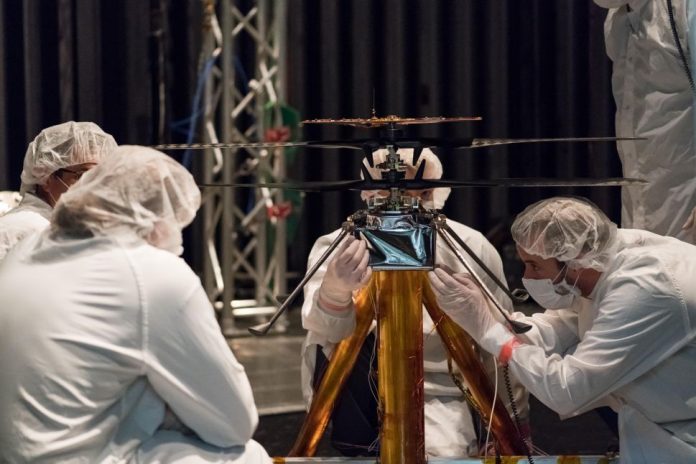 A few days ago, NASA revealed the design for its new miniature helicopter that it plans to send out into the red skies of Mars.

At the time, the space agency said that it needed to conduct several other simulations in order to see if the small chopper could manage through the extremely low temperatures and thin atmosphere it was going to be put through on the Red Planet. As of now, it’s been officially announced that it’s passed all of the necessary tests.

NASA has successfully tested its Mars-bound helicopter drone under Mars-like conditions. The craft hovered just a few inches in the air, but that’s all the team of scientists from the JPL (Jet Propulsion Laboratory) needed. The test took place in January in the Space Simulator, a 25-foot-wide (7.62 meters) vacuum chamber at JPL that has helped prep many robotic planetary explorers over the decades.

“To truly simulate flying on Mars we have to take away two-thirds of Earth’s gravity, because Mars’ gravity is that much weaker,”

It was able to achieve this with the creation of a so-called “gravity offload system” – a motorized lanyard attached to the top of the helicopter to provide an uninterrupted tug equivalent to two-thirds of Earth’s gravity. To be able to replicate the Martian atmosphere, the team injected carbon dioxide into the chamber after sucking out all nitrogen, oxygen and other gases.

Two test flights took place, each one taking the helicopter to an altitude of a mere 2 inches, which was enough for the team to confirm that it could fly autonomously in a thin, Mars-like atmosphere.

NASA plans to launch the Mars Helicopter along with the Mars 2020 rover next year. The helicopter is not an integral part of the mission, though. NASA describes it as just being an impressive technology demonstration. Results from the test will be used to inform the development of more sophisticated flying aircraft meant for Mars (like a helicopter with a camera).

The Mars Helicopter will ride to Mars attached to the undercarriage of the Mars 2020 rover.

Several months after landing on the red planet, the helicopter will take to the skies for a series of 90-second autonomous flights.

NASA conducted two test flights with a total of about one minute of flight time. The drone reached an altitude of just two inches, but the team says that’s all they need. That proves the helicopter works in Mars-like conditions. The next time it flies could be on Mars in 2021.

The mars 2020 rover will be based on the wildly successful Curiosity rover, which is still chugging along on Mars after nearly seven years. The new rover will conduct geological tests, determine the habitability of the environment, and search for signs of ancient life.

“The next time we fly, we fly on Mars. Watching our helicopter go through its paces in the chamber, I couldn’t help but think about the historic vehicles that have been in there in the past. The chamber hosted missions from the Ranger Moon probes to the Voyagers to Cassini, and every Mars rover ever flown. To see our helicopter in there reminded me we are on our way to making a little chunk of space history as well.”

No doubt, this little helicopter could be the start of something big, providing us with an entirely new way of exploring the surface of another world.

Lucille Butler - April 20, 2019
0
They were born without a working germ-fighting system, every infection a threat to their lives. Now eight babies with "bubble boy disease"...
© I'm Herald 2020. All Rights Reserved.