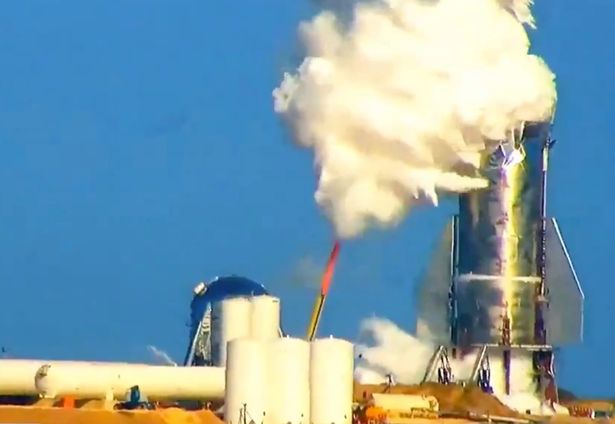 A test version of SpaceX’s next-generation rocket, Starship, partially burst apart during ground tests in Texas today, erupting plumes of gas and sending some pieces of hardware soaring into the sky. Live streams set up by local space enthusiasts captured the failure in real time this afternoon.

The explosive result occurred while SpaceX was seemingly conducting some pressure tests with the vehicle at the company’s test site in Boca Chica, Texas. The local live streams showed the vehicle venting gas periodically throughout the day, indicating that testing was underway.

“The purpose of today’s test was to pressurize systems to the max, so the outcome was not completely unexpected. There were no injuries, nor is this a serious setback.”

a spokesperson for SpaceX told reporters.

This prototype was meant to test the design of Starship – a monster spacecraft the company is working on to transport cargo and people to deep space destinations like the Moon and Mars. In fact, this same vehicle is the one that SpaceX CEO Elon Musk showed off to reporters in September. At the time, he claimed the test vehicle could be doing flights to low altitudes within the next couple of months and that some version of Starship could reach Earth orbit within six months.

While Musk hasn’t specifically commented on the failed test, in a reply to tweet about it, he confirmed that SpaceX is now focusing its efforts on a new prototype for the Starship, called MK-3.

He said: “[Mk-1] had some value as a manufacturing pathfinder, but flight design is quite different.”

Once deployed, Starship will be the world’s most powerful launch vehicle, according to SpaceX.

Cathy Garrett - October 21, 2018
0
Job discrimination is rampant nowadays, especially to the members of the LGBTQ community. Because of their sexual orientation, they are more prone to rejection...
© I'm Herald 2020. All Rights Reserved.