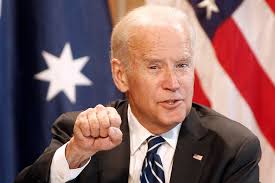 Joe Biden will base his presidential campaign headquarters in Philadelphia, his team announced Thursday.

The move, which came as no surprise, is the latest signal that the former vice president and current clear front-runner in the race for Democratic presidential nomination is focused on winning the crucial battleground state of Pennsylvania in what he hopes will be a 2020 general election showdown against Republican President Trump.

The announcement comes two days before Biden holds what’s being billed as a ‘campaign kickoff’ rally in downtown Philadelphia. The former vice president also chose Pennsylvania as the location for his first campaign event – a speech at a union hall in Pittsburgh –  after declaring his candidacy late last month.

“We’re proud to anchor our campaign in the birthplace of American democracy. Philadelphia is a thriving city and a testament to the American spirit, built by the ingenuity and tenacity of ordinary people who did extraordinary things. Its storied history and celebrated diversity will serve as an inspiration for Team Biden, and is the ideal setting to continue our fight for the soul of this nation.”

Biden was born and spent his early childhood in Scranton, Pennsylvania, 120 miles north of Philadelphia, which is the nation’s sixth most populous city. And he’s lived his entire adult life in and around Wilmington, Delaware, just 30 miles south of the City of Brotherly Love.

Biden went on to represent Delaware for nearly four decades in the U.S. Senate before serving as President Barack Obama’s vice president. But he kept his deep ties to his native state and was often referred to by Keystone State Democrats as “Pennsylvania’s third senator” during his years in the upper chamber of Congress.

Pennsylvania is one of three Rust Belt states – along with Michigan and Wisconsin – making up the traditional Democratic ‘blue wall’ in presidential elections that Trump narrowly captured in 2016. The president edged out Democratic nominee Hillary Clinton in Pennsylvania by less than 1 percentage point, becoming the first GOP candidate to carry the state since George H.W. Bush in 1988.

The Biden campaign HQ announcement comes one day after a new poll indicated Biden with a clear lead over Trump in a hypothetical general election match-up in Pennsylvania. According to a Quinnipiac University poll of Keystone State voters, Biden topped Trump 53-42% in a potential 2020 match-up.

The poll also indicated Biden with a large lead over the rest of the historically large Democratic field in the race for the party’s presidential nomination.

Biden’s headquarters will be located in Philadelphia’s City Center, with some 50 staffers working out of the offices at the onset.

The president has set up his campaign offices in Northern Virginia, as well as New York.

Stella Byrd - April 2, 2019
0
He called the law that would have banned possessing any magazines holding more than 10 bullets unconstitutional. In a...
© I'm Herald 2020. All Rights Reserved.